Which panel do I have to install on my sailboat? 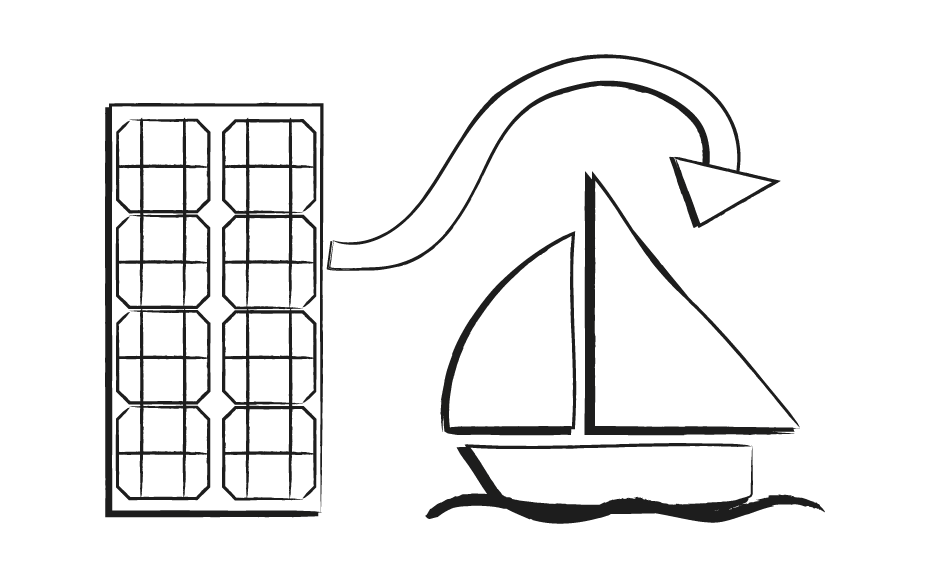 Which solar panel (or how many) do I have to install to make my sailboat autonomous and not being forced to turn on the engine to recharge the batteries?

Flexibility, lightness and resistance to sea water are the main features which make the Tregoo solar panels the ideal choice for installations (even do it yourself) of pv systems on sailboats.

But which and how many pv panels are the most suitable to meet the energy requirements of a sailboat?

The energy requirements of a sailboat obviously depend on the kind of boat (size, number of facilities on board, average number of passengers, engine power, etc.) and on the sailor and his crew’s habits.
Anyway, it is possible to estimate the sizing of the optimal solar power system (meaning for "system" the set composed of solar panel and batteries) by calculating the average energy consumption and NOT the maximum energy consumption.

Here is an example of a table showing the energy consumptions of a 37’’ sailboat, calculated based on the actual hours of use by a sailor we involved in the test.

Table of the daily energy consumptions on a sailboat

Taking into consideration the above mentioned consumptions (2258 Wh), 4 Tregoo TL130solar panels are enough to cover the consumptions in less than 5 hours of nominal radiation (4 x 130W x 5h = 2600Wh).

However, the above mentioned sizing is "voluminous", that is, it is based on the assumption that the panels must cover all the consumptions. Actually, they allow for an autonomy that is not necessary in practice, due to two main reasons: the first one is that also the energy stored within the batteries is available and secondly because we are far from the harbor only for a definite number of days.

That’s why it is better to introduce a sizing based on different variables:

Considering that the energy of the batteries Eb added to the one produced by solar panels Ep must cover the energy absorbed by the users Eu we can write the following equation:

Considering that the quantity of energy is expressed in Watt/hour (Wh) and that it is equal to the immediate energy (in Watt "W") for the time of production/use (in hours "h"), we can rewrite the equation in this way:

That is, the energy stored within the batteries (Eb=Whb) added to the one produced by the solar panels in Ns daily hours of sunlight (Ep=Wp*Ns), must cover the energy absorbed by the users in one day (Eu=Whu).

If we introduce the variable indicating the days of autonomy (Nd), which is fundamental for our sizing calculation, the equation will be the following:

By so doing, we can establish the ratio between the sailboat autonomy expressed in days (Nd) and the power of solar panels to install in order to have such autonomy (Wp).

This equation, using the fixed data of the capacity of the set of batteries (Whb), of the users’ absorption (Whu) and of the hours of nominal sunlight (Ns), becomes a function of two variables (Nd e Wp), that can be graphically represented by a curve branch.

Let's suppose that we have, in our boat-type, a battery pack of 520Ah at 24V. Depending on the batteries type (lead, lead-acid, lithium, lithium-iron-phosphate, etc.) there is a different degree of "usability" of the nominal capacity, due to the maximum Depth of Discharge tolerated by the battery (DoD). For any type of battery is good practice not to go in deep discharge, so as to preserve the life of the accumulator.
Thanks to the ratio between Power, Voltage and Current intensity, we know that Watt=Volt*Ampere and obviously Wh=V*Ah. Therefore, our set of batteries for a total of 360Ah, has a Watt/hour power equal to 24V*360Ah= 8640Wh. Furthermore, taking into consideration the consumptions in the above mentioned table, we have Whu=2258Wh.

Finally, let’s suppose that the solar panels are able to give the nominal output for 6 hours a day, that is Ns=6h. Given these invariables and approximating the Watt/hours in Kilowatt/hour, our variable curve Y=Nd and X=Wp will become the following: 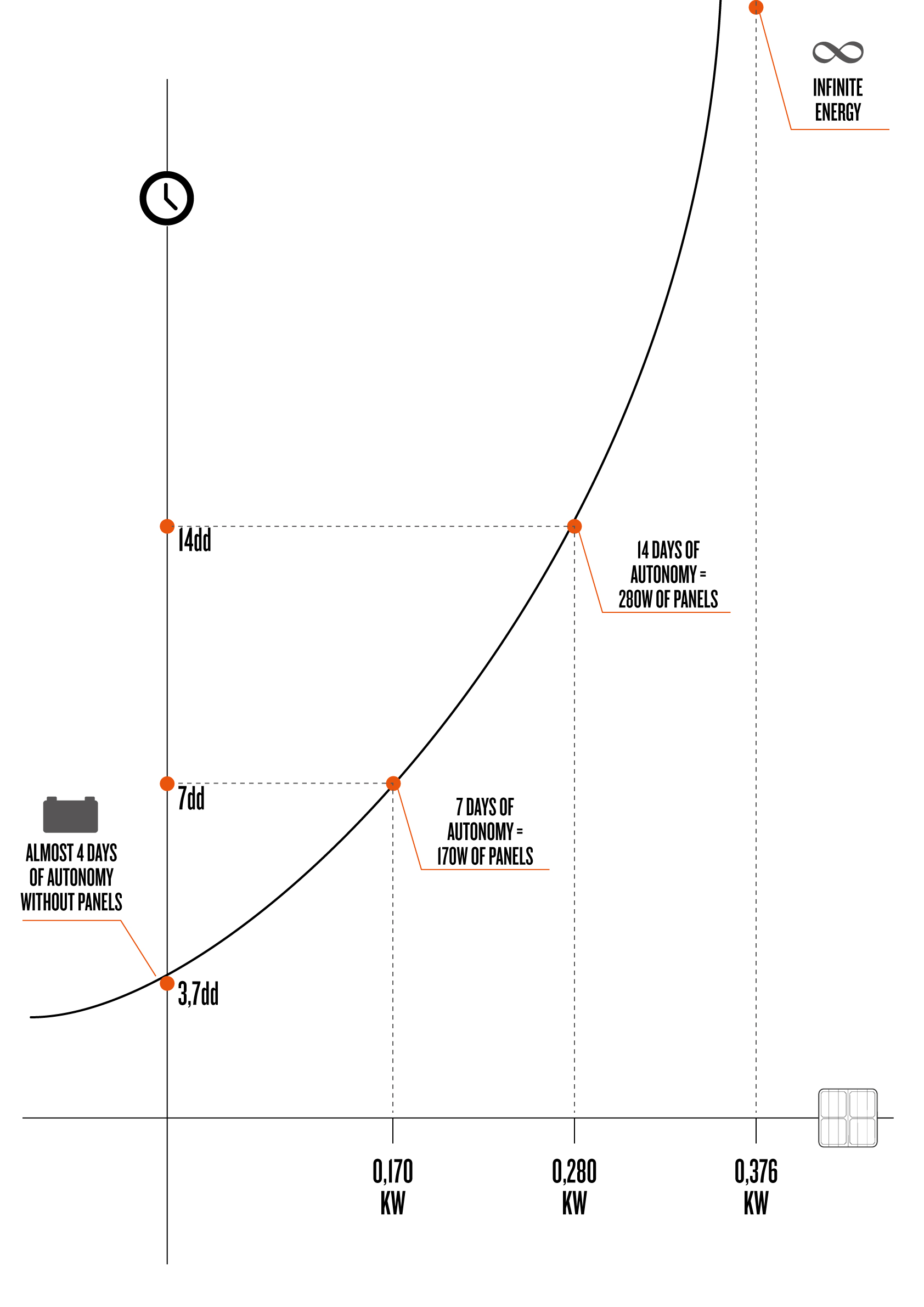 Looking at the chart and using the formula, it is easy to determine the sizing of the solar power system. For example, in case we would like to have a week of autonomy in our boat, that is Nd=Y=7gg, we’ll need some solar panels producing at least 170Watt (considering the power of Tregoo modules, two pv panels TL90 of 90 Watt each would be enough).

In case we needed two weeks of absolute autonomy from the electric grid, or from the engine ignition to recharge the batteries, the charts tells us that we would need 280W (two TL130 or four TL80).

The asymptotic curve finally shows that from 370Watt on, our boat acquires a theoretical endless autonomy, since the energy of the solar panels covers all the consumptions. In this case, with 3 TL130 solar panels of 130Watt and 6 hours of sunlight per day, we’ll have an offshore holiday all lifelong!